Tattoos: how the art gets under our skin

Tattoos: how the art gets under our skin

An exhibition in Falmouth, UK, captures the creepy fascination of tattoos, while showing that they are not just artwork but performances 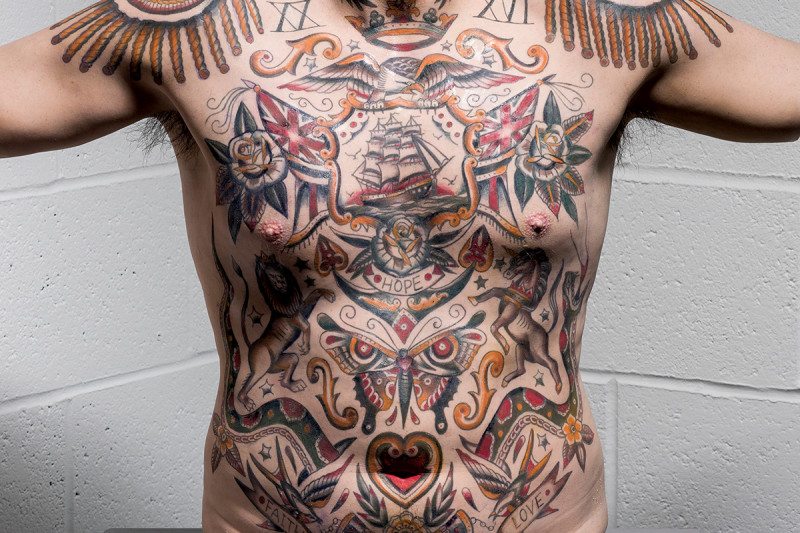 TURN left as you enter Tattoo: British Tattoo Art Revealed, and you will be led through the history of a venerable and flourishing folk art. Turn right and you will confront a wall of 100 disembodied forearms. They aren’t real, which is a nuisance for the artists who tattooed them – since silicone is nothing like as easy to work with as human skin – but a comfort for the rest of us.

Alice Snape, editor of Things & Ink magazine, curated this wall to showcase the range of work by today’s tattoo artists in the UK. But you really need to see the rest of the exhibition first. You need time to contemplate the problem Snape’s 100 Hands is there to solve, that this is an exhibition whose subject is entitled to wander off, and cover up.

There’s something frustratingly arch about tattooing. Tattooists jealously guard their stencilled designs (called “flashes”) even as they create pieces that, by their very nature, come with their own sales reps. Clients (perhaps influenced by 2005’s reality show Miami Ink) wax lyrical on the deeply personal stories behind their tats, then plaster photos of them all over Instagram.

Practitioners exploit their liminal status even while they bemoan their lack of recognition. In a show full of repeating figures and useful (though never intrusive) signposting, my favourites were the boards that tell you “what the papers said” at different times in history. Every generation, it seems, has come to the same startling realisation that “tattoos aren’t just for sailors”, yet the information never seems to stick. Tattooing is an art that does not want to be fully known.

The problem facing the show’s curators is: how do you define the limits of your enquiry? If the art has to be invited in, cajoled, reassured, even flattered into taking part, how do you stop shaky inclusion criteria from compromising objectivity?

Natural history solved the problem long ago. The rule used to be that if you wanted to study something you went out and shot it: the rifle was as much part of your kit as your magnifying glass. The Maoris of Polynesia, aware of the value Western visitors put on souvenirs, used to catch people, tattoo their faces, decapitate them and sell their heads to collectors. The draughtsman aboard Charles Darwin’s ship the Beagle had a travel box lined with the tattooed skin of dead Maori warriors.

“People make tattoo guns out of anything that vibrates. The first were Victorian doorbells”

These days the tattooed collect themselves. Geoff Ostling, for one, has arranged for his heavily (and beautifully) tattooed skin to go to the National Gallery of Australia after he dies. Gemma Angel, an adviser to this exhibition, spent her doctoral study among the 300 or so items in the Wellcome Collection’s archive of human skin, and she reckons there’s a growing interest in post-mortem tattoo preservation.

It is to this exhibition’s great credit that it takes no time at all to find a voice pinpointing exactly what is so discomforting about this idea. In a cabinet of personal testimonies I find this remark by a Catherine Marston: “Tattoo is an art form but I don’t think they should be collected because when a person dies they die too. You hear of some really weird designers that use skin that’s cut afterwards, once they die then that goes on display. I think that diminishes the whole idea of a tattoo. It’s art with a time zone rather than timeless.”

Such voices are valuable here because even this democratic, eclectic exhibition can’t quite capture the shuddering intimacy of the form it celebrates. Tattoos are not just artworks, they are also performances. Getting a tattoo hurts just enough to make you dizzy, and lodges that intimate moment in your memory.

Though the art is the point of the show, it would not work nearly so well without the artefacts it has borrowed from working tattooists and from the Science Museum in London. People make tattoo guns out of virtually anything that vibrates. The first machines were made out of Victorian doorbells. You can salivate at images all you like, but nothing gets under the skin like a doorbell-based tattoo gun once wielded by Johnny Two-Thumbs of Hong Kong.

This article appeared in print under the headline “Skin-shuddering intimacy”