K.D. hasn't been afraid to lash out at those who have hated on him since his arrival in The Bay 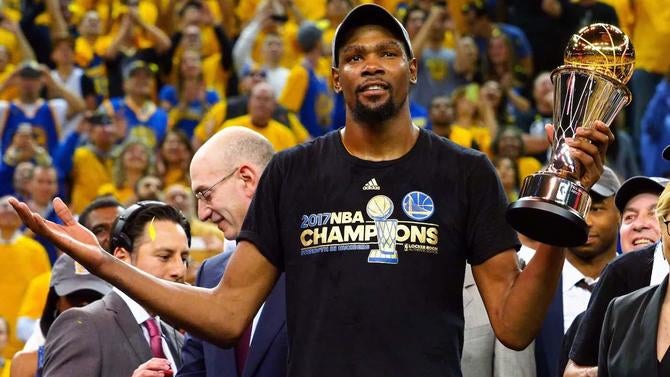 Kevin Durant hasn't shied away from defending himself to those who have trolled him for his decision to leave Oklahoma City for the Bay Area a summer ago. The NBA Finals MVP recently rolled out a new signature sneaker that was an indirect troll at the haters.

Even taking Durant's track record of firing back at critics into consideration, getting a tattoo to pay tribute to his haters would be a new level. But that's something he's apparently contemplating, as he noted in an appearance on Complex's Hot Ones YouTube series earlier this week, adding that he gets the "snake" comment so much he might just imprint it on his body.

"I get the snake comment so many times, I might just tattoo one of those on my arm," Durant said.

Since leaving the Thunder, Durant has made his body a mural of sorts, adding a tattoo of Tupac Shakur and Rick James among others, so new body art wouldn't be terribly surprising. But a tattoo of a snake acknowledging his haters exists seems a bit petty, especially for one of the best players in the NBA.